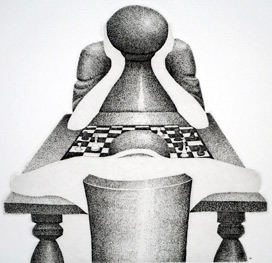 Chess
This video describes Elaine's transition from pen & ink drawings to etchings. Her drawings used a stipple technique with many thousands of dots creating the image.

The series was first shown at the Triton Museum of Art, Santa Clara, CA in December 1976. The series was also the subject of a cover story in the March 1979 issue of Chess Life Magazine. The etching "Pawn Pun" was featured on the cover. Thirty-six years later "Pawn Pun" again appeared on a cover, this time Chess Life for Kids, August 2015.

Elaine culminated the series in 1980 with "The Knight's Scutcheon" which appeared on the cover of Chess n Stuff in October of that year and won the Chess journalism award for best cover art. This etching went on to become the 2008 winner of American Artists Professional League Alma M. Preed Memorial Award.